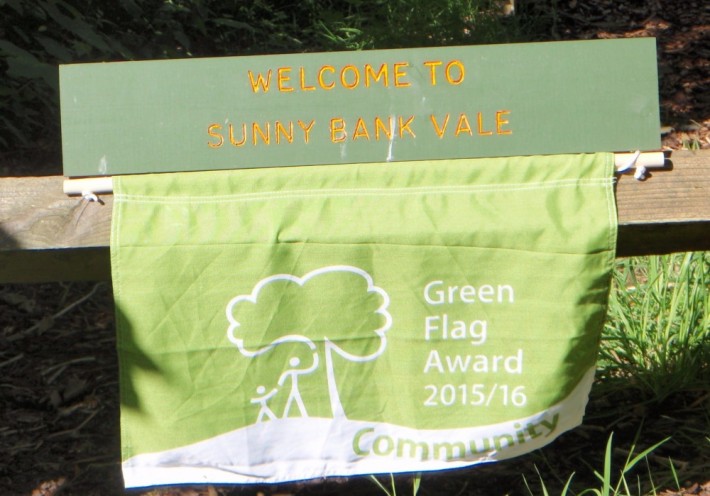 Sunny Bank Vale, Manchester named as one of the best in Britain

More parks and green spaces than ever will be flying the Green Flag Award this year – more than 1,582 across the UK.

Sunny Bank Vale in Droylsden, Tameside, Greater Manchester is one of the very best in the UK – and that’s official.

The green space is among a record-breaking 1,582 parks and green spaces that received in 2015, a prestigious Green Flag Award – the mark of a quality park or green space.

The award recognises and rewards the best parks and green spaces across the country. A Green Flag flying overhead is a sign to the public that the space boasts the highest possible standards, is beautifully maintained and has excellent facilities.

Sunny Bank Vale is an area of public open space in Droylsden, 39 acres in total, with open and free access for all. It is surrounded on three sides by houses.

Four years ago a group of local residents came together to form the Friends of Sunny Bank Vale and in that short time, the Group has achieved its aim and re-claimed the land for local people to use.

The Vale now incorporates a network of safe paths which all connect with each other enabling residents to enjoy some attractive countryside right on their doorsteps and at the same time promoting a message that “exercise is good for your body and your mind”. The Group has also worked hard to create an environment that encourages and promotes wildlife which will continue for years to come.

Howard Boots, Chair of the Friends of Sunny Bank Vale said: “We are absolutely delighted to receive a Green Flag Award for the first time from Keep Britain Tidy. This Award recognises and highlights the hard work of volunteers and the support of the site owners, partners and funders that will enable people in Droylsden and further afield to benefit from a green space of the very highest quality”.

In recent years Sunny Bank Vale has received £15,664 in funding from the Bradley Park Community Fund to provide new and upgrade existing footpaths at the site. Funding has also helped create wildflower areas and undertake general site maintenance to keep the site looking its best.

International Green Flag Award Scheme Manager Paul Todd said: “We are delighted to be celebrating another record-breaking year for the Green Flag Award scheme. All the flags flying this year are a testament to the efforts of the thousands of men and women, both staff and volunteers, who work tirelessly to maintain the high standards demanded by the Green Flag Award”.

The announcement of this year’s Award winners comes in the same week that thousands of people up and down the country are enjoying Love Parks Week (July 24 to August 2), an annual celebration of our country’s fantastic green spaces and the community groups that bring them to life.