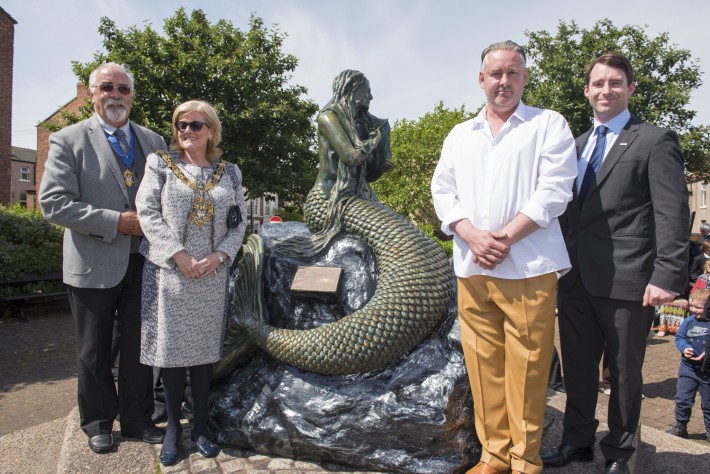 Mermaids come ashore in New Brighton ahead of busy summer

The New Brighton Mermaid Trail, which takes its inspiration from ‘The Black Rock Mermaid’, who was said to have appeared to a local sailor in New Brighton in the 18th century, is to be officially unveiled on Wednesday 7th June.

The Mermaid Trail is a set of six identical Mermaid statues situated in key locations across New Brighton. They have each been individually decorated, four of them by local schools, one by a community group and one by the local artist who designed and sculpted the statues, Barry Canning-Eaton. Both the design and decoration have been kept a closely guarded secret in the lead up to the unveilings.

Each statue is accompanied by an information board which, when followed in order, takes trail followers through a story based on the legend of ‘The Black Rock Mermaid’, as told by local storyteller Cathy Roberts.

Starting from Kings Parade, the first statue – the ‘Ebb & Flow Mermaid’ – is situated next to the Championship Adventure Golf and is decorated by children and young people engaged with Ebb & Flow Community Interest Company, with its decoration inspired by natural wonders in and around New Brighton.

Statue number two is the work of pupils from St Mary’s Catholic College, with a nautical and sea-faring inspired decoration that they have called ‘The Inked Siren of Black Rock’. This is situated on the corner of Victoria Road and Atherton Street close to New Brighton railway station.

The location of the third mermaid is on Seabank Road near to its junction with Magazine Lane. The ‘Rock On Mermaid’ is decorated by pupils from The Mosslands School in Wallasey and tells a strong story of young people, boys and girls, who are finding their own voice.

Vale Park, looking out onto the promenade, is where visitors will find the fourth mermaid, decorated by young people who attend Wirral Hospitals’ School. Entitled, ‘Paxtonea – the Soothing Siren’, its decoration tells the story of the legend in a way that provokes awareness of the sensory needs of people with anxiety and on the autistic spectrum.

Pupils from St George’s Primary School are responsible for the ‘Mermaid of Memories’, the fifth statue on the trail. Situated on the promenade opposite the Floral Pavilion Theatre and Conference Centre, the pupils have sought through their decoration to take people on a journey back in time to a dark yet glowing evening at New Brighton fairground.

The trail ends on Victoria Parade in ‘Old Town’ New Brighton with the sixth statue – the eponymous Black Rock Mermaid – this one decorated by the creator of the Mermaid statues, Barry Canning-Eaton.

The Mermaid Trail project has been made possible thanks to a successful bid for £10,935 by the New Brighton Coastal Community Team (NBCCT) to the Burbo Bank Extension Community Fund, a grant scheme set up by DONG Energy to benefit voluntary groups and organisations located near to the coastline where it is carrying out the extension to the offshore wind farm.

Caroline Laing, Wirral Council’s representative on the New Brighton Coastal Community Team, said: “It is hoped that the trail will raise awareness of the legend of The Black Rock Mermaid and bring her story to the attention of the hundreds of thousands of visitors the resort attracts each year. The trail is purposefully designed to show visitors parts of New Brighton that they might not otherwise have got to see and show them some of the attractions and unique character that can be found away from the traditional tourist locations.”

Caroline and other members of the New Brighton Coastal Community Team, will be joined by the artist, Barry Canning-Eaton, Lee Rollason from funders DONG Energy, those who decorated the statues and other local people on a walkabout of the trail to mark the official launch on Wednesday 7th June.

They are being led by local storyteller Cathy Roberts of Literally A Bookshop, who will recite the tale as they go. The trail will begin at 11am.

It is hoped that local residents and visitors to New Brighton will also take part in the launch by joining the Mayor of Wirral at the end of the trail on the 7th June at 2.45pm at Victoria Road, near to The Olive Tree restaurant.

After that, the Mermaid Trail is officially open to the public. A special guide, featuring a custom-made illustrated map by local artist Anita Cunningham of Fat Cat Illustration, is available for £1 from local shops and businesses across New Brighton.

Wirral Chamber of Commerce, Mother Redcaps (A Cumbric Care Home) and local couple Carl and Rose Leckey have each sponsored an individualMermaid and will also be in attendance at the launch.